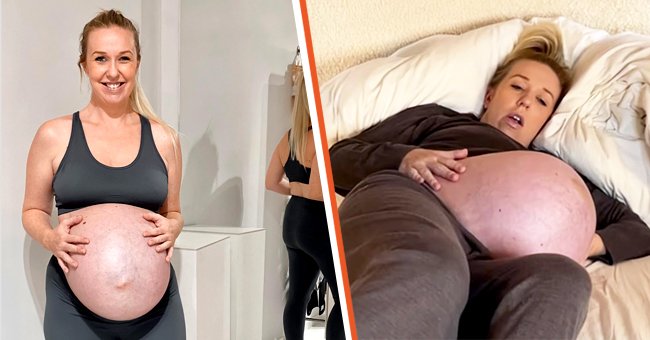 When a couple welcomed twins after almost a year of IVF treatment, they were overjoyed. With highly slim chances of getting pregnant again, they thought they were done having kids until they were surprised most unexpectedly.

Nothing compares to the pure bliss of becoming parents to adorable little ones and seeing them grow up in front of your eyes. Many couples might endure endless bouts of pain, trauma, and struggle before experiencing parental joy.

In short, parenthood is a rollercoaster ride filled with multiple twists and turns that might take an emotional toll on people. But it’s all worth it because no parent will have it any other way. The same was true for Michella Meier-Morsi and her husband, Mark Morsi.

Nearly four years ago, in 2018, the couple from Copenhagen, Denmark, became parents for the first time after a challenging journey. They received IVF treatment for more than a year when Michella discovered she was pregnant in October 2017.

The Danish woman recalled that she felt happy and scared when she learned about her pregnancy. She had read various statistics and posts about complications of twin births and didn’t know how to ward off her fear.

The twin girls, Filippa and Ophelia, were born at 37 weeks, and the pregnancy was incredibly cumbersome for Michella. She shared that her body was in grotesque pain and became so enormous and swollen that she had trouble walking.

THE PREGNANCY TOOK A SEVERE TOLL

The mom of twins shared her birth experience on Instagram, where netizens could follow her journey more closely. Following the birth, Michella stayed in the hospital for six days and returned home with her twin girls before Christmas 2018.

Here’s another story that you might like, and it’s about a pregnant mother who had to explain why she had a huge baby bump after tons of offensive comments from people.

The pregnancy took an enormous toll on her body, and soon afterward, the doctors told her she had “Diastasis recti,” a gap of about 2.7 cm or more between the two sides of her rectus abdominis muscle.

SLIM CHANCES OF GETTING PREGNANT AGAIN

Her left and right abdominal muscles had separated to make more room for the lower belly with a protruding uterus. Michella explained that typically, the abdominal muscles healed on their own after pregnancy, but that couldn’t happen to her without surgery.

Michella openly shared her journey on Instagram, posting pictures of her belly and expressing her thoughts and feelings. Her posts amassed millions of views, and several netizens flooded her comments section, encouraging her to keep raising her voice.

Meanwhile, Filippa and Ophelia continued to thrive, and the Danish couple underwent another fertility treatment. However, the couple learned their chances of having kids again were only 12-15%, so they didn’t invest much hope.

Everything changed when in 2021, Michella experienced an unusual pain in her body and immediately booked an appointment with her doctor. She thought she had either had a miscarriage or was pregnant with twins again.

But, what the ultrasound revealed was far from her thoughts — she was expecting triplets. Michella and Mark sat frozen in their seats, shocked and speechless.

The mother of twins recounted that when she heard the third heartbeat, the quiet room echoed with her cries. After the initial shock subsided, the Morsi couple knew they had to prepare to welcome triplets.

Many people told them about the risks involved concerning all three babies surviving, but Michella never doubted her decision to go through with the pregnancy. Her baby bump became enormous and blue, covered in bruises, and she felt insurmountable pain.

The pain was so extreme that Michella couldn’t move or lie down properly. Finally, on January 15, 2022, at over 35-weeks pregnant, she delivered three boys, Charles, Theodore, and Gabriel, via C-section.

After enduring the longest and most challenging 36 hours of her life, she was relieved and delighted to embrace her bundles of joy.The triplets spent two weeks at the hospital and returned home happy and healthy with their parents.

As first-time parents to the precious trio, Michella and Mark hardly get any sleep because their sons keep them on their toes. Michella’s body struggles after two complicated birth experiences, but people have hailed her a “superhero” for her incredible strength.

Although her belly became comparatively smaller after delivering the triplets, Michella still feels uncomfortable and experiences pain. Moreover, several netizens have appreciated her for being vocal about her postpartum body.

According to Michella, she will have to undergo a scraping procedure to get rid of the blood built-up in her uterus, which would otherwise risk the chances of inflammation.

At the same time, handling two three-year-old girls and three premature babies has been extremely difficult for the couple. In an Instagram post shared on February 16, Michella summed up her triplet journey from week 12 to 35. She wrote:

“I do not miss the weight, the pain, the fear of premature birth, the mental pressure or being tied to my bed – but I already miss the babies inside it a bit.⁣”

Charles, Theodore, and Gabriel are a little over two months old and have two proud older sisters and doting parents. “We have three healthy boys who are all over three kilos. I am proud and relieved and happy! And I’ve never been so tired in my whole life,” chimed Michella.

A HAPPY FAMILY OF SEVEN

With 338,000 followers on Instagram and adorable posts centered around her beautiful family, Michella is gradually adjusting to her new role as a mom to five children.

We wish Michella and Mark all the best, and we hope they celebrate many more precious moments with their family. Please share this story with your loved ones.